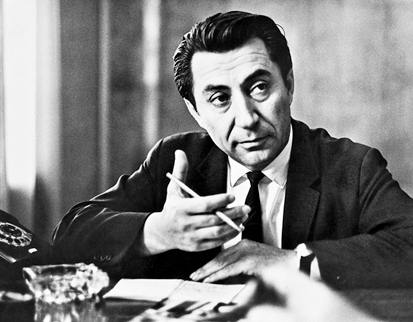 Grigor Hasratyan. Yerevan residents know him as the best mayor

Each city has its own individual –myth. Such as Baron Haussmann, prefect of the Seine Department in Paris, thanks to his efforts today’s image of France’s capital was developed. Yerevan also has its own myth-Grigor Hasratyan, who was a mayor from 1962-1975.

He was born on  November 24th and it is a nice chance to recall his living years, decode his intellectual character, emphasize whatever he didn’t manage to do, as he was released from the office in 1975 due to the political changes in the country and underwent dishonest criticism at that time. Grigor Hasratyan was born in 1919, in Akhlatyan (aka Ashotavan) village of Sisian region.

He was two years old when adopted by his uncle, a prominent scientist “walking encyclopedia”, Morus Hasratyan, who took good care of him.  After finishing his seventh year in Myasnikyan school, he continued his studies in Mining and Metallurgical vocational college. In 1937 he entered Yerevan Polytechnic Institute, Faculty of roadway.

After graduating the institute, Grigor Hasratyan started his professional career, gradually going up the stairs in the state administration. And wherever he was employed he proved himself to be energetic and motivating, with great leadership skills. During Hasratyan times, city of Yerevan developed and improved, upgraded and became much greater. Our capital raised to the level with which we are proud of.

Under Hasratyan’s leadership, monuments and buildings were erected, which are considered capital’s hotspots. During these years, 3 million square meter residential area was built, which allowed 90000 families residing in Yerevan to improve their housing conditions. Residential arrays, monuments, hotels and bridges, fountains and education institutions were erected. Streets, water pipes were remodeled, the Ropeway of Nork was built.

With Hasratyan’s direct support and participation, Museum of Modern art was established in Yerevan (at that time the exhibitions of modern painters were being destroyed) and children’s Picture gallery.

Wise and daring mayor was supporting every new and contemporary concept, which simply in most cases opposed the official ideology.

A bulky book can be published about vibrant unforgettable patriotic activity of a devoted Armenian.

“We needed such an individual in those years to lead the large scale urban development. His work path, as an urban developer, started in “Yerevan project”, which was a great school for Grigor Hasrtayn to fully comprehend and sense, what is the city about. Later, “Grigor Hasratyan, as an urban developer, was rhetoric, artistic with pleasant voice, rich vocabulary and respectful look. He was a leader wherever he might be. Hasratyan had its own style and working method of leadership, and that is how he was able to bring talented people around him. Thanks to him, a professional wide path opened for J. Thorosian, F. Darbinyan, St. Kurkchian, St. Kndekhtsyan and others”.

“I am very proud that I share the period with Grigor Hasratyan. I can confidently say that Yerevan for its exterior look, as a capital was established during the years when Grigor Hasratyan was the president of city council executive committee. He wanted to see buildings with great publicity on the main avenue. The architects understanding the innovative inspiration, immediately started to develop projects which never were completed. Perhaps they will remain as utopia”.

“Grigor Hasratyan had an everlasting dedication to his city, loved it and lived with it. He knew each corner of the city, each park, bush, stone. He was closely  connected with the “Yerevan Project” he founded. Always visited the institute and fully understood that the ideas were born here, therefore they should start here, discuss and bring to life everything that adds spirit to. As a mayor, he was trying not to deceive the principles of  center design by Great Tamanyan trying to turn that to the boulevard, rest area. Its cornerstone was the establishment of Ring shape park, which was a huge urban development project

“In the urban development, the mayor should play a very important role, as most depends on his policy, views, mindset.

Grigor Hasratyan in my impressions, was a man who was in love with his work. And this kind of a man definitely possesses great values.  His limitless energy and tactics, manners created a tense energetic field that not everyone will be able to do in such situations. These kind of people are in the domain of uniqueness and have great potential to work, convey and charge.

“Grigor Hasratyan remained a myth for me. During his lifetime he already was a myth, a real model. It is interesting, at night we always walked around the city with Minas and you know how many times we  saw Hasratyan walking around at 3 and 4 am at night. You know I learnt a lot from him”.