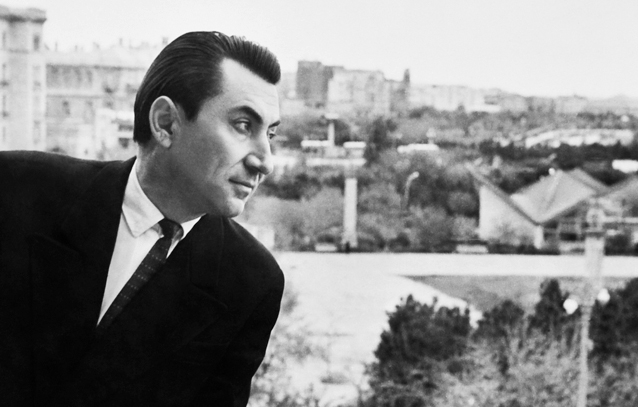 Man and the human in town

There was a time when it was a shame not to trust the Yerevan residents in Yerevan, a shame not to believe in him. This was the period when Grigor Hasratyan, the talented public figure, great architect and organizer and most importantly a personality with capital P lived and acted. He was adored by the intellectuals of all times, and he had the personality and acted motivating the valuable confidence that we need it today.

Grigor Hasratyan was born on November 24, 1919 in Akhlatyan village(aka Ashotavan) of Sisian region. He was two years old when he was adopted by his uncle Morus Hasratyan, a renowned scientist, a walking encyclopedia. Graduating from school after Myasnikyan in Yerevan, Hasratyan continued his studies in Mining and Metallurgical vocational college and in 1937 entered the Faculty of Roadway in Yerevan Polytechnic institute. After graduating the institute, Grigor Hasratyan started working gradually going up the stairs in the state administrative field. The first position he held was the department of Armenia’s highway roads, where he worked as an engineer, road constructor in 1942-1944. Later he worked in the Department of Water Resources, for 5 years. As a professional in his field, Grigor Hasratyan took the position of Head of the Construction Department in Yerevan’s Leninist region. He was elected a deputy as regional council, and after two years he became a chairman. In 1956 he worked as a deputy to the chairman in Yerevan City Council. In 1958 he was appointed a director to the Yerevan Project Institute he had established. In 1960 Grigor Hasratyan was elected as a chairman of the City Council Executive Committee in Leninakan (presently Gyumri), when in 1962 he became a mayor of Yerevan until February 1975. During these years he worked at its best. Grigor Hasratyan, was both an urban builder and rhetoric, very artistic with a pleasant voice, rich vocabulary and with respectful appearance. He was a toastmaster during the gatherings and with its beautiful and emotional speech he was dominating and gracing the gatherings. Wherever he was, he was a leader. Hasratyan had its own style and working mode of governance and he was able to bring talented people around him. And bringing talented architects, constructors and the best artists, he beautified and built the city day by day.

He gave soul and liveliness to the stone town designed by Tamanyan. Yerevan was covered with a character. While realizing the project to develop and construct Yerevan as a capital, Grigor’s first and main issue was to create a civilized environment, where Yerevan residents would feel as prominent citizens and each resident would be instilled with the sense of honor towards its city and residence.

“Architecture is a means to upbring a human being. Yes, it is. Human Being is definitely the first factor in the construction. It is not about what we build it is about who we build for. Its spiritual world, tomorrow’s day, above all this is what we have to take care of.”

During his operational years he started the process of the establishment of Ring Shaped Park, Improvement of sections of the street, planting fruit trees, flower shrubs. As a mayor, he was trying to stay fair to the downtown project principles by Great Tamanyan, trying to turn it to the park, rest area and its keystone was the establishment of Ring Shaped Park.

Grigor Hasratyan loved trees and flowers and beautified the capital Yerevan with them.

Interesting incident happened one night. Because the authorities were against his decision, he changed the trees of irregular and disproportionate size and instead he planted trees with neat and round foliage. When only 2 trees were missing, finding out someone has the trees in Etchmiadzin, he brought them to the city. These beautiful trees are still there.

Grigor Hasratyan was  everlastingly dedicated to its city, loved Yerevan and lived with it. He knew all about every single corner of the city, every single park:

However, one of his valuable deeds was the design and construction of metro (It was launched in 1981). The next great achievement was the opening of Sayat Nova street. It was a very hard working process because it was required to demolish various huts. Although it seemed just impossible to unsettle the residents living in poor conditions in the center of the city and the country’s authorities didn’t easily agree with the proposal. However, Grigor Hasratyan was the mayor who was able even with the difficulty to achieve the goal. We owe him for the beautiful and important road that opened in the center of the city providing transit connection between Mashtots avenue and Khanjian street.

I am very proud that I have lived during the times of Grigor Hasratyan. I am hundred percent confident that Yerevan, as a capital with its outer appearance got established during the time when he was the president of City Council executive committee.

Indeed, you will remember Grigor Hasratyan when you pass by Ani hotel, Alexander Spendiaryan or Yervan Kochar museums. Passing by Modern Art museum or Swan lake, walk in the Ring shaped park or take the metro, walk on Sayat Nova street or simply pace on Zakyan street because all these was established during his period and with his eagerness.

The authorities during the Soviet period would not forgive his Individualism and his principles, and transferred him to the position of Deputy minister in Dairy and Meat products Industry in Soviet Armenia. In 1979 Grigor Hasratyan was appointed Head of the department of Monuments Preservation. Here, with energy typical to him, he started to implement organizational innovations. He replenished the monuments restoration design group with the corresponding experts, endowed with the project institute status. During the years of his activity more than a dozen of churches were partially or fully restored. Grigor Hasratyan was the director of Armenia’s Ethnography museum and Sardarabad memorial complex. He has been a Supreme Council delegate. He was awarded an honorary citizen of Yerevan in 1998.

Grigor Hasratyan died in 2001. However, people who know history of Yerevan and love Yerevan, will never forget this great man. I enjoy this marvelous city he established with his talent and own hands. Too bad, a human being does not admit and value its distinguished personalities as needed. And it is too bad that the earthy life of human is too short, otherwise patriotic people like Grigor Hasratyan could do much more for their city and homeland. Although everything that was established with his talent and effort, remains immortal for us and generations to follow.